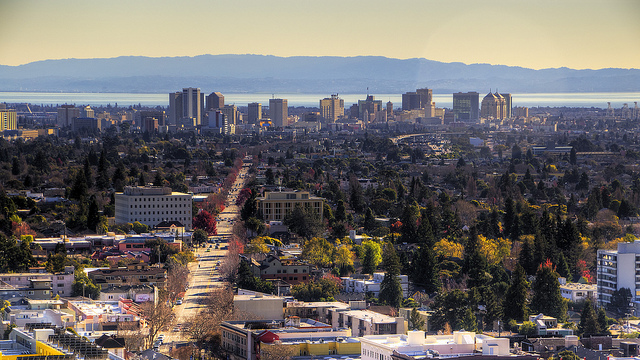 With San Francisco’s booming commercial and residential market, New York Stock Market money is now zeroing in on Oakland as its next investment. Over 10,000 residential units are in the works to be built yet there are little or no cranes in the air. Uber recently announced plans to open a 3,000-person office in the long-underutilized Sears building in downtown Oakland. Though only 3.1 percent of Oakland’s workforce is in the tech sector. That number is expected to grow as other companies follow Uber’s lead, seeking office space at a quarter of the cost of San Francisco. This has sent a major signal for the first time since the 80’s, proving that the office market in Oakland is ready for new buildings. Yet with all of the excitement there are still no cranes in the air. Why not?

Demand is certainly there with rent in Oakland having soared 12.1 percent this year over the last year, topping even the scorching pace of San Francisco’s price hikes and coming in second in the nation only to Denver. Buyers are looking at everything that they can get their hands on and trading is at more than brisk pace. All signs would point to a building boom. But nothing has really happened.

The reason is simple – construction costs are higher than the true value of the property. Prices for unentitled dirt for residential construction will sell for $70,000 a door. Entitled space sells fewer than $100,000 a door. Buyers buy on the basis of how many units they can build on a site and compare sales based on a price per door. These prices are between 20-25% of the prices per door in San Francisco. The challenge is to build residential units, which will cost on average of $350 a door–equal cost to build in San Francisco. Yet, although rising quickly, rental rates are still on average only half of San Francisco’s.

The office vacancy rate in Oakland has dropped to low teens for the first time in over 25 years. However, in order to build an office building, a developer would need to achieve a rental rate of $60 per square foot, which is much higher than the average rents for Class A property today.

All of the buyers are speculating that rents in both residential and commercial markets will continue to rise. Therefore, they are buying land to “land bank” for future development when the market rental rates actually hit target goals to start construction.

One major challenge for Oakland is that even if projects started construction today, large projects take between one to three years to complete. Therefore, Oakland’s ability to grow at a similar rapid-pace like San Francisco is unrealistic. There are other smaller markets, which are primed to take advantage sooner, and start building now. For example, San Carlos just announced several major office developments that will be starting construction soon early in 2016.

Player’s jocking to become prominent players in Oakland are all echoing the same perspective. It will take one major business owner or investor to take the plunge and start construction in order to initiate the boom. Once that happens, the rest of the players will begin to move forward. In the meantime, Oakland has to understand that the tech boom is in San Francisco and will continue to be here unless someone jumps in soon. Otherwise, Oakland’s boom market could potentially fizzle out quickly.

via Where Are the Cranes in Oakland?

Be the first to comment on "Where Are the Cranes in Oakland?"