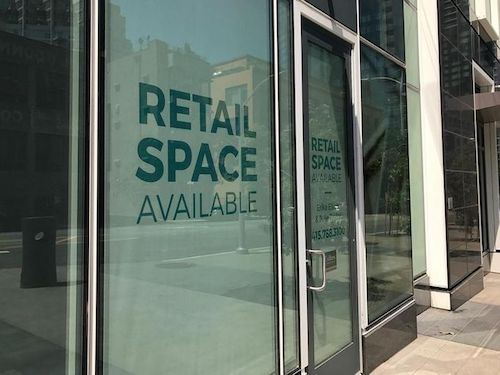 As you walk the streets of San Francisco, especially in the downtown district, you will probably see a lot of empty storefronts. These vacancies are not only bad for their landlords, but also for businesses around them. Empty retail space invites homeless people to settle in the doorways, which can deter shoppers from visiting surrounding stores.

Currently, there are 340 vacant stores in what are called NCD (neighborhood commercial districts) in the city.

Supervisor Aaron Peskin plans to put a new tax on the November ballot to address this issue. Under his proposal, owners of commercial properties in NCDs could  be fined $250 per day if their property is vacant for 6 months or longer. And while storefronts are the visible face of the long-term vacancy problem, Peskin wants to target residential properties as well. Landlords with three or more vacant units would also pay the $250 per unit, per day, until units are leased.

Supporters of a retail vacancy tax believe that many retail property owners are purposely leaving their storefronts vacant, in order to push rental prices higher, and also to take advantage of tax losses. It is true that there are certain owners, particularly in the Union Square and Richmond districts, that have recently purchased buildings in San Francisco while overseas to park money in the U.S. and become “absentee owners.”

But these are the exception rather than the rule. The typical reasons behind high retail vacancies are more complex.

First, you have Amazon and other online retail offerings that have changed consumers’ buying habits.  Shoppers today are less likely to browse or linger in stores: many want to get it done the fastest, easiest way­, and that’s online. Foot traffic, and demand for retail space, suffers as a result.

You also have a cost of living in this city that is high and getting higher. Discretionary income, which feeds retail spending, isn’t keeping up.

It’s worth remembering that two out of three new retail stores do not turn a profit, so opening a store is highly risky, especially amid a low nationwide employment rate where jobs are available and starting your own business is hard to justify. Add to that the high cost of starting a retail business in San Francisco, from building it out to purchasing inventory to hiring store managers to dealing with high theft.

Meanwhile, in many parts of the city, potential retail tenants who have more than 12 stores anywhere are subject to an additional layer of bureaucracy that could add an additional year of delay.

The majority of the building owners, and certainly retail brokers like myself, all are aggressively trying to fill these vacant spaces. In almost all cases, the rent is not the stumbling block; it’s the high cost of starting the business, strict government regulations, and the risk of ultimate success.

If this tax were to pass, both landlords and government will likely see a significant decrease in property value, which in turn will reduce city property tax revenue.

A vacancy tax could be part of an overall comprehensive city plan to revitalize our commercial retail spaces, but we need to look at ALL of the reasons for our current vacancy and review the options to streamline our regulatory process, consider new zoning uses for property that no longer can support retail, and potentially offer financial incentives to attract people to take the risk and open a new retail store in San Francisco.

Be the first to comment on "SF Business Times: S.F. vacancy tax is a terrible idea"