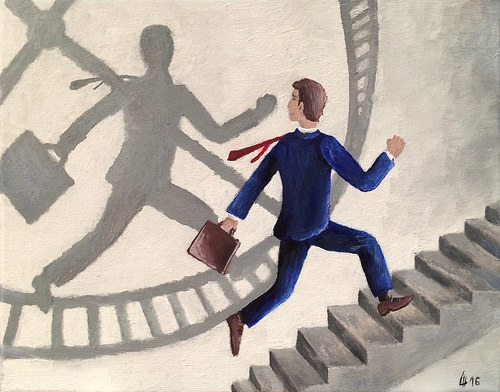 It used to be that most employees would simply punch a card when they got to work and punched a card when they left work. There were set days off for vacation and sick leave–with a full work week representing 40 hours. As salespeople, if we were employees, we too worked 40 hours as independent contractors, but the good ones would work a lot longer.

In order for us to learn if we were productive, we would take what we expected to earn in income and divide that number by the number of hours we were working and estimate what we needed to earn in order to make that intended income. For example, if we wanted to make 200,000 average/annually, we’d have 52 weeks minus three weeks for vacation which means we need to do $4,000.00 per week or based on a 40-hour work week $102.00 an hour in net production.

This became the formula taught at most sales seminars to gauge production results.

Today, it’s very difficult to quantify one’s performance. Cell phones have now moved offices from stationary to mobile, extending work hours and extending periods that someone can also not be working.

Social media and networking to secure new business has also changed the dynamics of qualifying one’s efforts. Today, all salespeople need a way to create a 24/7 marketplace for themselves when business can be generated anytime, any day.

In real estate, sales is extremely important because there are no “hours of operation” for when people are looking for real estate. You could easily get a lead midday or at midnight.

The problem for an individual salesperson, particularly an independent contractor, is that you cannot simply divide your working hours by the amount you want to make to gauge results. You really need to spend more time monitoring your daily activities and gauge results per specific effort.

This is why a business plan becomes such an effective tool. If you break down your business plan to include set pillars (or tactics) in which you are going to create business, you can quantify how many calls, networking connections, or emails you need to make and then track for success in each area. For instance, if posting a Craigslist ad is part of your business plan, you can count how many calls and connections you make as a result of your postings. You can then figure out how many of these connections lead to a deal as a percentage of how many connections are made. For instance, if you plan to post 10 Craigslist ads and you receive an average of 10 responses per week, which lead to one deal – then you can quantify a dollar amount against that deal.

You can apply this formula to cold calling, too. If you plan to make 100 calls in one week, you should expect two prospects to turn into one deal. You could quantify how much one deal would produce, and then measure that against your overall goal.

In the past, you would have a business plan tied to the number of hours you planned to work, but today, the business plan also stands on its own. If you track your results by monitoring each pillar, you can translate that into deal flow, average deal income, and then yearly income.

Yes, it’s still important to monitor your true working hours, but it is no longer the standard you should use. Instead, focus on the pillars of your business that you need to monitor the most and measure whether you are successful in implementing your business plan. If you are not, then you will need to change your plan to get your ultimate goal back on course.

The Hidden Fees That Eat Away At Your Budget

Be the first to comment on "Do Not Track Your Time, Track Your Activities"